On Thursday Google confirmed the rollout of the January 2020 Core Update as almost complete, but at the same time pointed out that, as with all Google Core updates, it could take up to two weeks to complete the process.

On Monday morning, the search engine operator had announced a new core update on their Twitter handle @SearchLiaison, called the January 2020 core update. It was rolled out over the course of the day via the various data centers. Since then, MOZ has been displaying “hot weather”, symbolizing violent fluctuations in the SERPs.

The New Year started with a bam for all SEO managers in the agencies and companies. Surely millions of websites will now be observed, analyzed and evaluated in the next few days. Sincere talks and jubilant outbursts will likely break out depending on the effects.

Searchmetrics now reports first violent reactions in the relevant forums. Depending on the impact of the update, the comments vary between frustration, critical replies and enthusiasm.

Sistrix also evaluated the shifts in the SERPS indirectly confirming the involvement of the medical sector indicated in the Searchmetrics article.

In Sistrix´ specific results it is striking that medical websites, pharmaceutical and finance sites see clear winners and losers. The data procesing company sees Google in the footsteps of previous core updates.

“Google sticks to its line with this core update: domains that relate to YMYL (Your Money, Your Life) topics are re-evaluated by the search algorithm and gain or lose visibility as a whole. Domains that have previously been affected by such updates are more likely to be affected again.” (translated)

As is not uncommon with core updates, entire websites are again affected positively or negatively by the changes. Increases and decreases in the rankings do not concern individual ranking pages or individual keywords but rather the overall assessment of websites along E-A-T.

In the meantime, two additional pieces of information have been published by Google in this context.

On the one hand, Google has pointed out that webmasters can define a desired favicon, which then will appear near search engine results. Attention was also drawn to the adaptation of the earlier 2019 redesign of the search results pages to desktop devices.

Both together can probably be seen in the course of trying to modernize the layout, as was laid out by Jamie Leach, Senior Interaction Designer, Search at Google in May 2019, when the optical changes were initially rolled out on mobile devices.

The search results page, too, has changed to help you discover these new types of information and quickly determine what’s most useful for you. As we continue our ongoing efforts to improve Search and provide a modern and helpful experience, today we’re unveiling a visual refresh of the mobile search results page to better guide you through the information available on the web.

Announcement and confirmation of the January 2020 Core Update

The announcement was formulated in the well-known Google manner and, among other things, introduced to the community by Barry Schwartz. 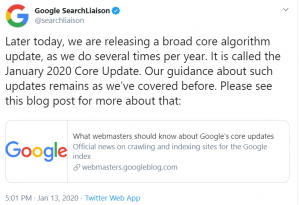 The implementation was confirmed later.

“The January 2020 Core Update is now live and will be rolling out to our various data centers over the coming days.”

Core Updates in 2019 and earlier

There had already been some important updates in 2019, including the core updates of March 2019, June 2019 and September 2019. The previous year the “Medic Update” had caused massive changes in news sites from the health sector.

The September update saw a blow against a unique business model. Google’s update resulted in certain content presentation being punished. The September 2019 Google Core Update especially hit many subdomains hosted on well-known high-authority domains. It has been speculated that Google wanted to direct this update against a business model called subdomain leasing, white label affiliate marketing, or white label leasing.

In July 2019, the Google Maverick Update only caused a little excitement. Finally, in November 2019, there was a major update that affected local rankings and caused unrest among local service companies.

However, the last core update from September 2019 did not have the extreme effects as the March 2019 update had.

From Google’s point of view, trying to adjust the consequences of the latest core updates was pointless. Google has also only given very general information on what to consider if you have been affected by a core update in the past. Further comments from the official Google control room can be found here.

Adjustments through webmasters are not possible

The core passage from this statement makes it clear that Google gives the affected websites the advice that “nothing is wrong” with their content, rather the assessment or classification by Google has changed.

There’s nothing wrong with pages that may perform less well in a core update. They haven’t violated our webmaster guidelines nor been subjected to a manual or algorithmic action, as can happen to pages that do violate those guidelines. In fact, there’s nothing in a core update that targets specific pages or sites. Instead, the changes are about improving how our systems assess content overall. These changes may cause some pages that were previously under-rewarded to do better.

One way to think of how a core update operates is to imagine you made a list of the top 100 movies in 2015. A few years later in 2019, you refresh the list. It’s going to naturally change. Some new and wonderful movies that never existed before will now be candidates for inclusion. You might also reassess some films and realize they deserved a higher place on the list than they had before.

According to this reading, no specific measures for restoration are possible, since the affected companies are not primarily responsible for incorrect website design or administration. So it’s not against black hat SEO or bad content. Actionism is therefore pointless.